It looks like autumn, but this was my view yesterday on a cold but sunny winter morning on the Stiperstones. 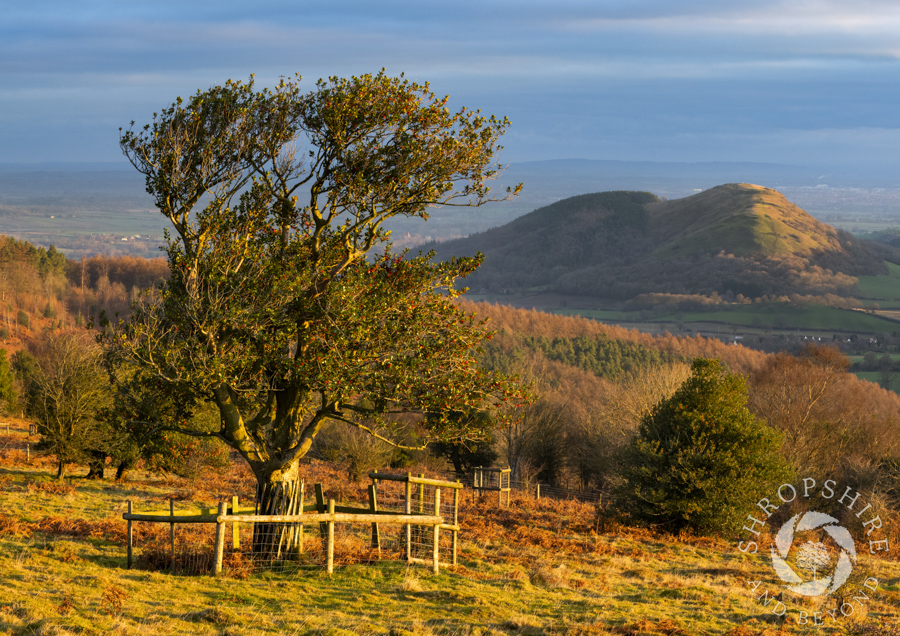 I was standing on the Hollies Nature Reserve and looking out across the Shropshire landscape towards Earl’s and Pontesford Hill.

The Hollies is a cluster of around 500 gnarled and wizened trees that are about 400 years old, and luck has played a huge role in the survival of what is one of the oldest holly groves in Europe

Many holly woods - or hollins - have been grubbed up over the past decades and centuries, but the holly trees are still standing proud here on the Stiperstones.

This is mostly due to the miners who worked the rich seams of lead beneath the spectacular 10-kilometre ridge, which rises to 536 metres above sea level.

The men working in the Snailbeach lead mines brought their families with them to live on this exposed hillside, and supplemented their earnings by keeping a few sheep and cattle.

The holly trees provided vital winter fodder for the animals thanks to their nutritious, evergreen leaves, which are soft and prickle-free above the browsing line.

This made them so valuable that they escaped the holly’s usual fate of being chopped down for firewood, or employed in uses such as walking sticks, knobs for teapot lids and handles for horse whips.

At the same time, the regular practice of cutting back the branches to get at the leaves invigorated the trees and prolonged their lives.

Today, the Hollies is in the safe hands of Shropshire Wildlife Trust. The reserve stretches to nearly 37 hectares (90 acres) and is a unique place that casts a spell over all who come here.

The trees are extraordinary characters, their contorted shapes creaking with age yet continuing to defy the march of the years thanks to their astonishing powers of renewal.

Visitors will often come across a rowan tree growing side by side with a holly, or even rooted inside it.

This is down to wintering thrushes such as redwings and fieldfares which feast on rowan berries and then perch in the holly trees. The birds’ droppings contain rowan seeds which germinate in cracks in the bark.

These so-called ‘cuckoo’ trees have, in many instances, grown stronger than their hosts, splitting the holly in two as their roots grow down.

No one lives on the ridge anymore, although the livestock remain. The legacy of lead mining - which began in Roman times - is also still very much evidence, despite extraction ceasing in the early 1900s.

The Hollies is a timeless, almost mystical place that cannot fail to have a profound effect on all who visit. Echoes of the past abound, and the shouts and sounds of those previous generations who eked out a living in this wild spot feel but a heartbeat away.

2022
Harvest time in the Stretton Hills Full moon over Ludlow and St Laurence's One foot in the past in misty Clun Valley Autumn glory as sun rises over Ludlow Misty sunrise over beautiful Corvedale Rocks and gnarled trees in 'wild' Shropshire Veteran yew beneath slopes of Brown Clee A different view of the Shropshire landscape Early-morning reflection at Ironbridge Sunset on ancient oak known as Ronsak Harvest time beneath the Long Mynd Quiet reflection on the Severn at Ironbridge A magical morning on the Stiperstones A stroll into the history of Shrewsbury Peace and quiet on Nordy Bank hill fort Brilliant blaze of red near Much Wenlock Call of the cuckoo in lovely Ashes Hollow Golden glow on church and Titterstone Clee History amid the buttercups at Clun Timeless scene on historic Wyle Cop Out and about on Wenlock Edge A rhapsody in blue across the county Dramatic skies in the Stretton Hills Blossom and blue sky in an English heaven Mist and birdsong in the Clun Valley Storm clouds over the Devil's Chair A walk into history down Grope Lane Springtime in the Thankful Village Tragic tale of the 'hurricane' family Power and glory of two Shropshire castles Carpet of spring flowers at Shipton A landscape of white beneath the Wrekin Glorious morning over north Shropshire Misty sunrise over the Onny valley Snow and ice on the summit of Brown Clee
2021
A look back at our best images from 2021 Sea of white as sun rises over Bridgnorth My home from home in the Clun Valley Autumn reflections in the Llangollen Canal Flash of colour over Titterstone Clee Harvest time in the shadow of the Wrekin Sunshine and rain at Stokesay Castle Magical view as sun rises over Shropshire Landscape that inspired novelist Mary Webb A step back in time along Offa's Dyke Village that may have inspired Conan Doyle Sunrise and silence in the Shropshire Hills A bird's-eye view of Shropshire Spectacular sunrise over Ludlow Patchwork of green beneath Moyledd Hill Evening sunlight on Titterstone Clee Hailstorms, wind and rain on Caer Caradoc Spectacular blossom across Shropshire Light and shadows on the Stiperstones A frosty morning on Whitcliffe Common Spring blossoms into life in beautiful Clun A view of Bridgnorth with a difference Brief encounter on Hopesay Common Sunshine and snow on Caer Caradoc Dark shadow of a Civil War massacre Pink glow of moonrise over the Wrekin
2020
Our favourite images in a year of challenges Frost and mist over dreamy Bridgnorth Misty dawn in the Redlake Valley Legacy of industry on Brown Clee Country idyll of the postman poet A step back in time at Wenlock Priory Golden light on Tolkien's Middle Earth A magical sunrise on Caer Caradoc Judges commend Ironbridge image Tranquil evening in the Clun Valley Peace and solitude at Brook Vessons Sunrise and shadows at Clun Castle A landscape in green and gold Misty dawn over the ruins of Ludlow Castle A celebration of beautiful Shropshire Triumph of the Clun Green Man Sea of gold at Smethcote church Sun and snow on the Clee Hills Spring is just around the corner Watery scene at Attingham Park New Shropshire book on the way A visit to 'Shropshire's Pompeii' Early morning sunshine on Linley Hill beeches Winter sun on the Hollies Nature Reserve Mist over Shropshire Reflections on the past Sunrise from Caradoc
2019
End of an era at Ironbridge Sunset picture in national magazine 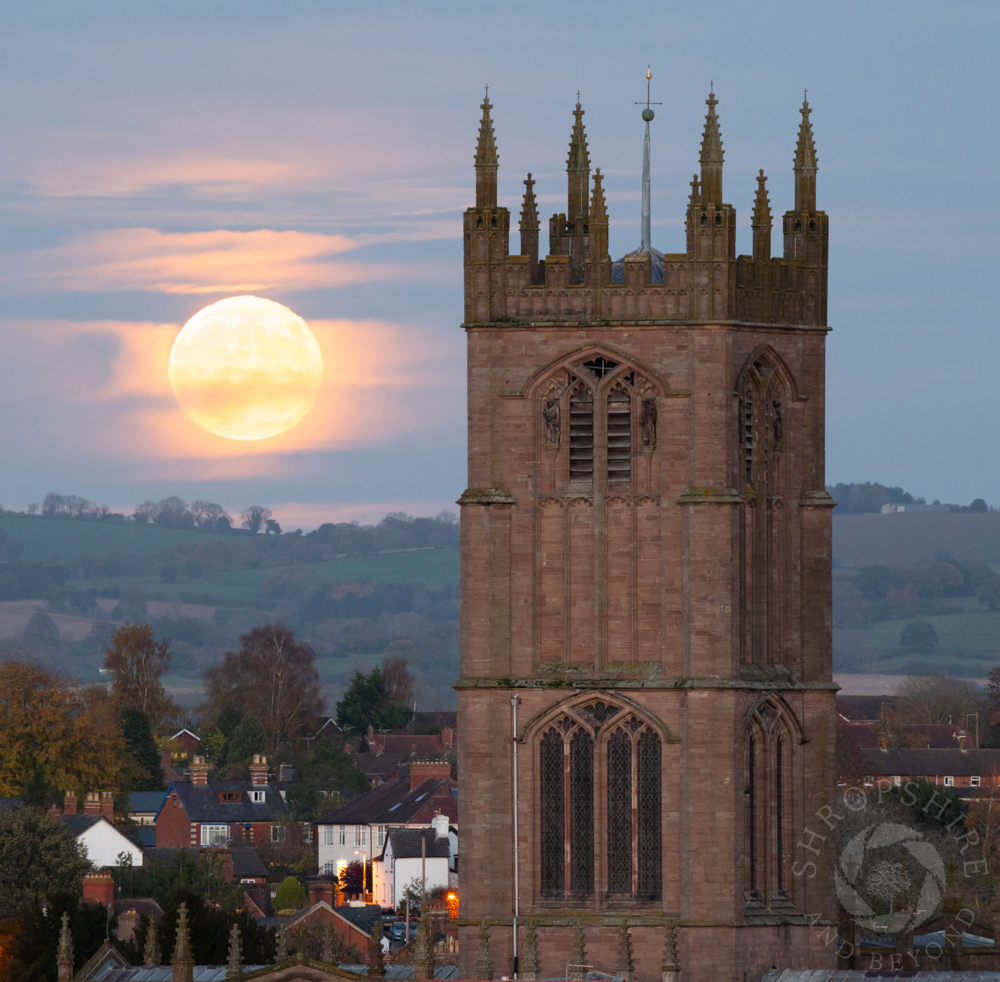 Moonrise over Ludlow - my view of St Laurence’s Church, seen from Whitcliffe Common. 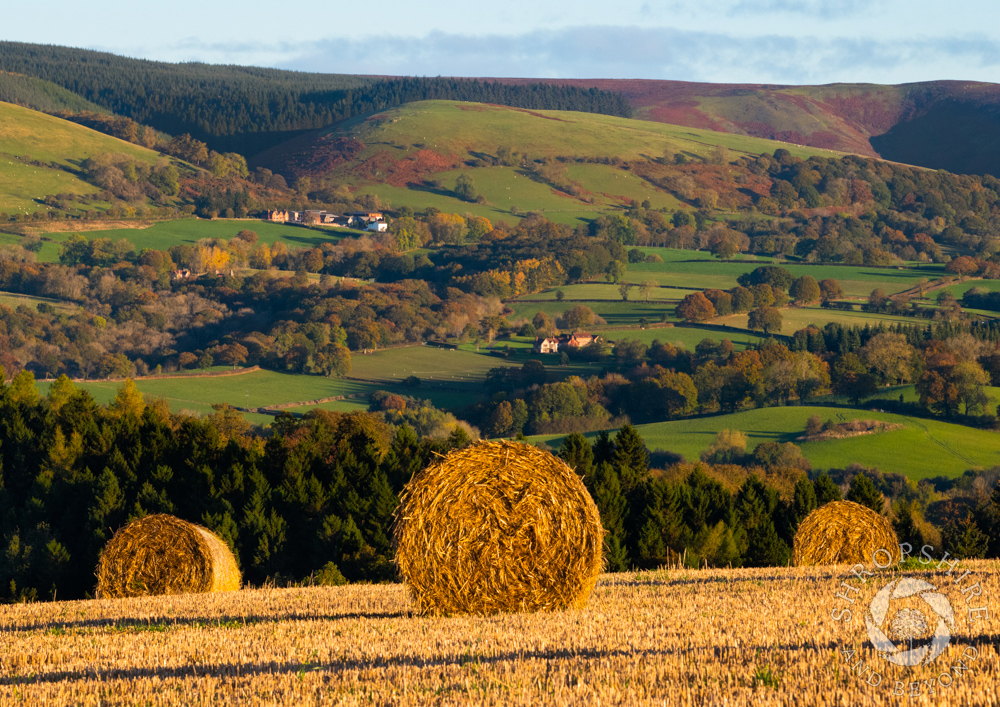 A Shropshire harvest - straw bales near the village of Edgton, with the Long Mynd in the distance. 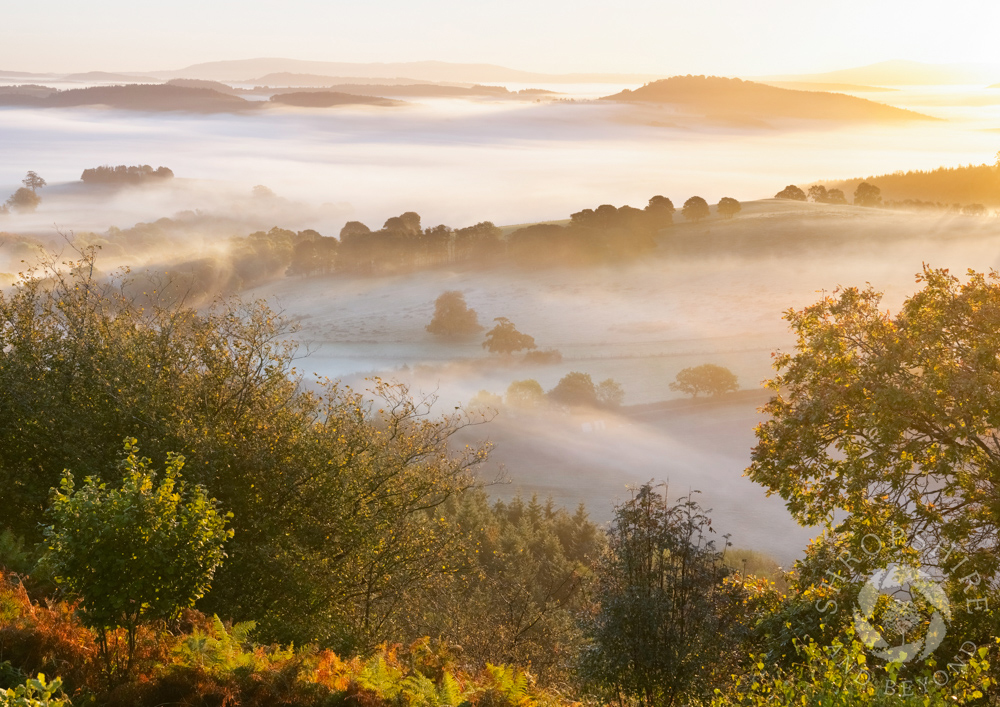 Here's a magical view at sunrise, with pockets of mist encircling the hills and fields of the Clun Valley.